Album Coverart for the album "Excursions in Time & Space" is ready! 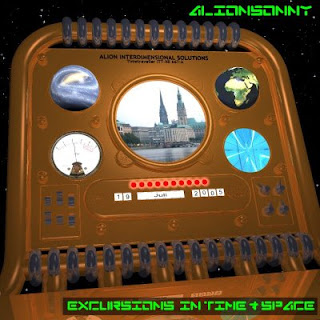 ...and done! The last missing coverart for my album "Excursions in Time and Space" is ready. Again it is 3D Raytracing Art, this time done using the software "Cybermotion 3D Designer". Well, what to say? The album title demanded a picture of a time machine, and I did one. It took quite a time to create the 3D scene, but rendertime was again below 5 minutes.
Just as I said, this was the last missing coverart of all of my four albums and so it is time to release a new one. I have loads of songs in my archives, but not enough for an album which fit into one topic. So I first have to release some more songs. Well then: Let's work!
Eingestellt von alionsonny um 12:16 AM