Album Coverart for the album "Early Xperiments in Dub" is ready 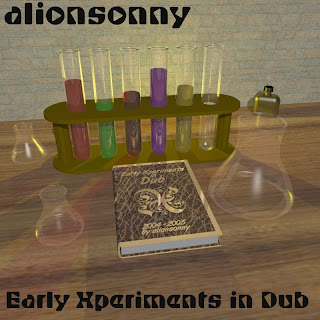 Ok, the album coverart for the album "Early Xperiments in Dub" is ready. The album, which was released quite a time ago, and which contains my first Dub Reggae songs from the years 2004 and 2005, had no coverart until now. Now I have finnished it. I created it, using the free 3D Raytracing Software "PovRay". I don't know how long exactly it took to create the scene, but it were quite some hours. I programmed the whole scene using the so called "Scene Description Language" SDL and did not use a PovRay modeller because I don't like the PovRay modellers and programming in the SDL is much easier for me as a programmer. The rendering took 4 minutes and 16 seconds on my little rendermonster. Every other Raytracer would have taken much longer to render the image. Clicking on the image will take you to a larger resolution which you can save to disk for printing your own CD-cover.
Eingestellt von alionsonny um 11:58 PM