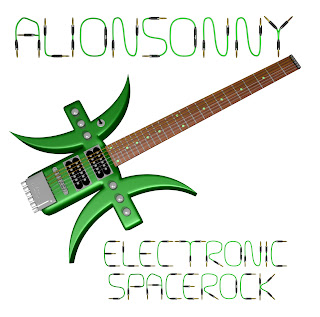 This has been never before since the alionsonny project has been launched in 2004. What? Simple: Never before I released two albums in one year. And now it has happened: After the (at least fo me) overwhelming success of "Alion - Original Soundtrack", I release today, Anno 2010, another album titled "Electronic Spacerock". And this album is also a brandnew thing, because it is 100% different from all albums I published before. No Reggae, no Soundtrack Music, but only synthesizer music, influenced by the sound of 1980's syntheszizer music, categorized by others often as Synthpop or Electronica. I call it Electronic Spacerock, because the concept of this music is to create rockmusic usually played using a typical rockband setup with synthesizers only. A additional part of the concept is to tske advantage of techniques which can be only be created using synthesizers and especially sequencing, such as drumpatterns impossible to play for a drummer or keyboard lines, which are not really playable for a keyboarder because they are, for example, too fast to be played by a human being. The album contains mostly songs from 2009 to 2010 but also songs which are from the years 2006 to 2008. To be exact there are five songs from 2010, three from 2009, one from 2008, two from 2007 and also two from 2006 on this album. Enough words, here's the album, of course FOR FREE. The complete album, including high resolution coverart, will be available in form of a RAR-archive on my limited webspace for a time. Just use this link to download it. You can also view the coverart and something about how it was created on my graphics blog. Just click here to get there. If you just want to check out the music and don't want to download the whole package now, you can also find it for listening on this page on LastFM.
I am allways glad if you spread the word about my releases and I am even more glad about short or long reviews on your Blogs. Just let me know if you do one and I'll be sure to mention them on my blogs and provide backlinks to your blogs.