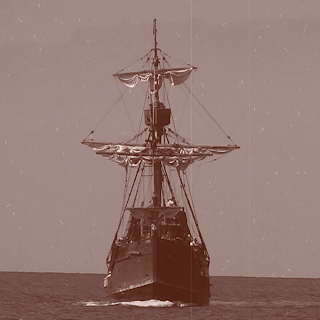 Oh, that's complicated to explain ... or not? Well, let's sinply get started:  I guess quite a few of you will think " Oh no, not the island again", when they see the term "Madeira" in the song title, or maybe "will that EVER end?". "No!" is the correct answer to the latter question. However, it doesn't matter very much, how a song is titled. What matters is the sound.

And especially our beloved "genre fascists" will once more break out in weeping , gnash their teeth or will break out in open contempt for my person. I already know that from absolutely sufficient experience. Should I do it? Should I say the song "Pirates of Madeira" has just a minimal similarity or even IS some kind of REGGAE? Should I? No, I do not want to be responsible for deaths. And precisely for this reason, you, dear reader, dear listener, should  follow my example and refrain from a more thorough discussion of the subject of genre localization of this musical piece, if possible . Since "there is no blessing in this" , as a very wise old lady often used to say . And do not think you would escape the judgment of the genre fascists if you simply choose a different genre to locate this musical piece. Well, for example the techno fans (Goa / Trance) will not threaten you with "Fire & Brimstone" because of the genre blasphemy, but you will not make yourself popular either.

With this kind of a piece of music it is like with so many typical foods of different regions : Do not ask what's in it as long as it tastes ;). The song has, during it's extremely long development from a simple loop to the now available prerelease version, undergone some rather turbulent conversions . If you, like a friend of mine , are of the opinion, that this song would have suited the Willma Poppen project more than the alionsonny project, then I can tell you, for the general amusement, that the song was at least once temporarily destined for each of my 3 major projects. Fact is: The song started as a typical alionsonny song idea. One of those "bouncy, funny reggae-ish" thingies, which make the Reggae purists freak out. Then the song transformed so much into the direction of pop techno, that I had to call it a 100% Willma Poppen Project track. In between, albeit in questionable mental constitution on my part, the song was once also a candidate for Cimeliums "Madeira" album.

That the song then still developed to what it is today, is due to the fact, that I once again enjoyed a delicious Madeira wine 3-4 nights ago. And while doing that, I watched the video of the day on the Santa Maria de Colombo in 2011, aswell as the video from 2012. I constantly had this accordion melody and the next day it was clear to me that:
Said and done ! And so I worked the last 3 days almost non-stop to get done what you can listen to now . By the way, is the track 11 of 13 for the new alionsonny album "Continuity". The next song is already pretty much ready for pre release. Especially my "old time fans" will love to read what it will be: Chapter 3 of the the popular "BrainForest" series! Continuity ;)

And now have fun with the Pirates of Madeira!
Eingestellt von alionsonny um 8:29 PM